We are entering an exciting era where mass spectrometers are being taken out into the field, flown high into the stratosphere and sent deep in to the ocean, for unprecedented detection of environmental air and water contamination. These methods allow for real time detection of hazardous water or air containments, (for example oil leaks) which would facilitate rapid cleanup measures.  The presentation will survey research conducted by  utilizing battery detection schemes deployed on aircraft and watercraft platforms.  Smith will also detail his own Rotating Field Mass Spectrometer (RFMS). Several collaborations with the Univ. of Hawaii and Navy were inaugurated using the RFMS in water sampling and air sampling.  These include: 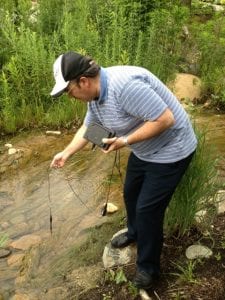 The current IWU project focuses on environmental contaminant detection.  Smith “resurrected” his JPL project in 2007, shortly before he left JPL to join IWU. The portable assembly includes two of his own RFMS, one with an electro-hydrodynamic (EHD) ionizer for liquid sampling and the second configured with a gas ionizer inlet.   He has repackaging the RFMS to fit inside a roll-around case, (see figure) small enough to be regarded as checked baggage at airports. Smith has recently compared saline and bio-diesel samples analyzed with his RFMS and compared with GCMS system here at IWU. The reference standard used is calibrated FAME, (Fatty Acid Methyl Esters) samples. Research will investigate how EHD ionize these organics in solution yet show minimum ionization fragmentation.

From the filing of U.S. patents to performing ocean deployments Smith has always wanted to perfect the method of routine environmental monitoring. In locations such as Marion, IN, there are ground water contaminates from agricultural pesticides.  Marion was home to a large RCA/Thompson TV manufacturing concern.  Trace amounts of industrial metals such as cadmium and mercury may be present.  The plans are to use students to perform calibrations. It is thrilling to show students techniques that could also be used in environmental protection efforts. This may lead to air sampling platforms mounted on a large kite or an unmanned “drone.”