A new major thrust of research here at IWU by Steven Smith is laboratory generation and analysis of Vacuum Ultra Violet (VUV), UV and x-ray photons observed from the solar wind particle impact with comets and planetary atmospheres. Proposals for observed X-ray emission mechanism have included: 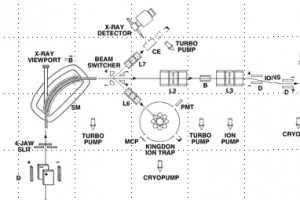 Likely due to Solar wind made up of protons and alpha particles. [This is not a complete sentence.]
Additional X rays seen from minor ions (O, C, Fe, Si, Ne, N) make up ~0.1%.  As charge transfer efficiently produces excited states of highly charged ions this model reproduces observed intensities.

From 1989 to 2007 I was involved at JPL/Caltech with an experimental setup where we have/had a 2 keV to 10 keV times charge state ion beam produced by an Electron Cyclotron Resonance Ion Source (ECRIS). The highly charged ions produced (eg. O+6, Fe+13, Si+3 ) enter a vacuum chamber target region and are observed colliding in a (gas or solid) cell, and emitting soft x-ray to VUV  spectral lines. A McPherson grazing incidence vacuum grade ultraviolet VUV monochrometer is used to analyze the photon signal at particular wavelengths from 5 nm to 400 nm. The PM tube will be used to pick up the photons within the wavelength limits of a MgFl2 or quartz window. The HV and Amplifier is placed outside the vacuum. I also plan later to use a UV  (and in vacuum grade) CCD camera from Andor, Photonics or Hamamatsu, depending on cost. The CCD will allow multiple wavelengths to be sampled simultaneously. 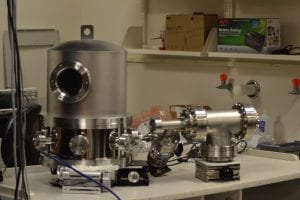 This planned IWU research is somewhat a continuation of research I was doing while at JPL/Caltech from 1989 to 2007. Shown below is a layout of that facility for reference purpose. We are setting up an ionizer and x-ray detector here at IWU to perform similar measurements of X-ray fluorescence.  Ions will come from a commercial “glow discharge” ion source, called the “Colutron” as well as custom ion beam sources produced from “cold cathode” and even nano-spray ion injector systems Steven Smith has developed. Shown below is a plot of X-ray Spectra obtain from a 36 keV Oxygen source impacting CO gas molecules, as well as 42 keV O6+ impacting on a Helium gas target.

I was Principal Investigator on a NASA code S Astrophysics program dealing with measuring metastable lifetimes of highly charged ions.  Ions produced by the ECR are trapped in an electrostatic Kingdon trap operating at ultrahigh vacuum  We have published results for C+, O+2, and another publications  for Fe+9,Fe+10 and Fe+13.

We are now in the process of building up this type of system at IWU. Ions are produced by a commercial Ions source called a “Colutron” and filtered through a velocity “Wien” filter. 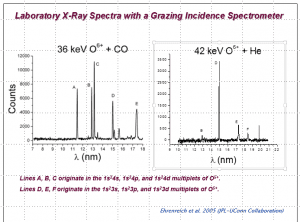 The ions produced by the Colutron are injected in a scattering cell, and x-ray and VUV photons detected by “x-ray detector” which can be a germanium crystal detector, or with higher resolution, a McPherson grazing incident monochromator described below. During this last Summer 2017 Steven Smith started building up preliminary vacuum equipment lines in room BHSN 322. These components are described below:

Our main target vacuum chamber was setup summer 2017 and is built around Norcal commercial vacuum chamber. We have thus far obtained vacuums on the order of 2x 10-7 Torr inside the Bell Jar chamber.

The ions produced by this system will be accelerated to kilo-electron volt energies and impinge on a gas or solid target. The x-rays produced in these x –ray fluorescence interactions are then energy /wavelength analyzed by a commercial McPherson Grazing Incidence soft x-ray Monochromator.

I have been a lifelong amateur astronomer, and am well versed with practical nighttime observing sessions.   I have conducted a number of public outreach sessions through the JPL Astronomy club and various JPL public relations outreach programs. In these sessions, the general public was invited for a lecture/slide show and then a viewing session through a number of JPL and Caltech portable telescopes.  These 8-14″ instruments were used for example to view several bright comets, the Mercury (daytime) solar transit, and most recent close opposition of Mars. I have also performed local “Star Parties” at the Marion Indiana Public Library and the Indiana DNR  Mississiniwa Reservoir for the Boy Scouts I personally own and use a number of telescopes, including an 8″ f8 Newtonian and a 6″ instrument. I have constructed various optical setups both visual (astronomy) and bench top laser applications.