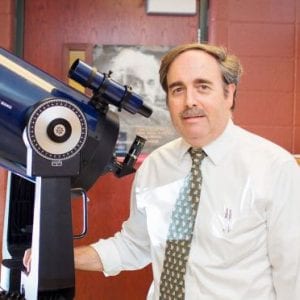 Dr. Smith is teaching Physical Science, College and University Physics, Astronomy, Electronics, Earth Science, and upper level undergraduate Physics courses at Indiana Wesleyan University. He endeavors to bring science and cultural issues into the science classroom where appropriate, i.e. 2nd Law of Thermodynamics and its implication for macroevolution. He is also an active astronomy enthusiast.

For the period 1989-91 Steven Smith carried out research at the Jet Propulsion Laboratory (JPL)  as a NASA-NRC Resident Research Associate.  In 1992 he became member of Technical Staff, Earth and Space Sciences Division, JPL. Until July, 2007 he was engaged in a variety of experiments in electron-collisions with highly-charged ions (HCI), including excitation, measurement of lifetimes of  metastable HCI states, and charge-exchange of HCIs with atoms and molecules, including measurement of X-ray emission spectra.

He has been an active member of the C. S. Lewis Society of Southern California, and is currently involved with C.S. Lewis and Friends Society at Taylor University, near Upland, IN.